Memories of the Chenango Branch 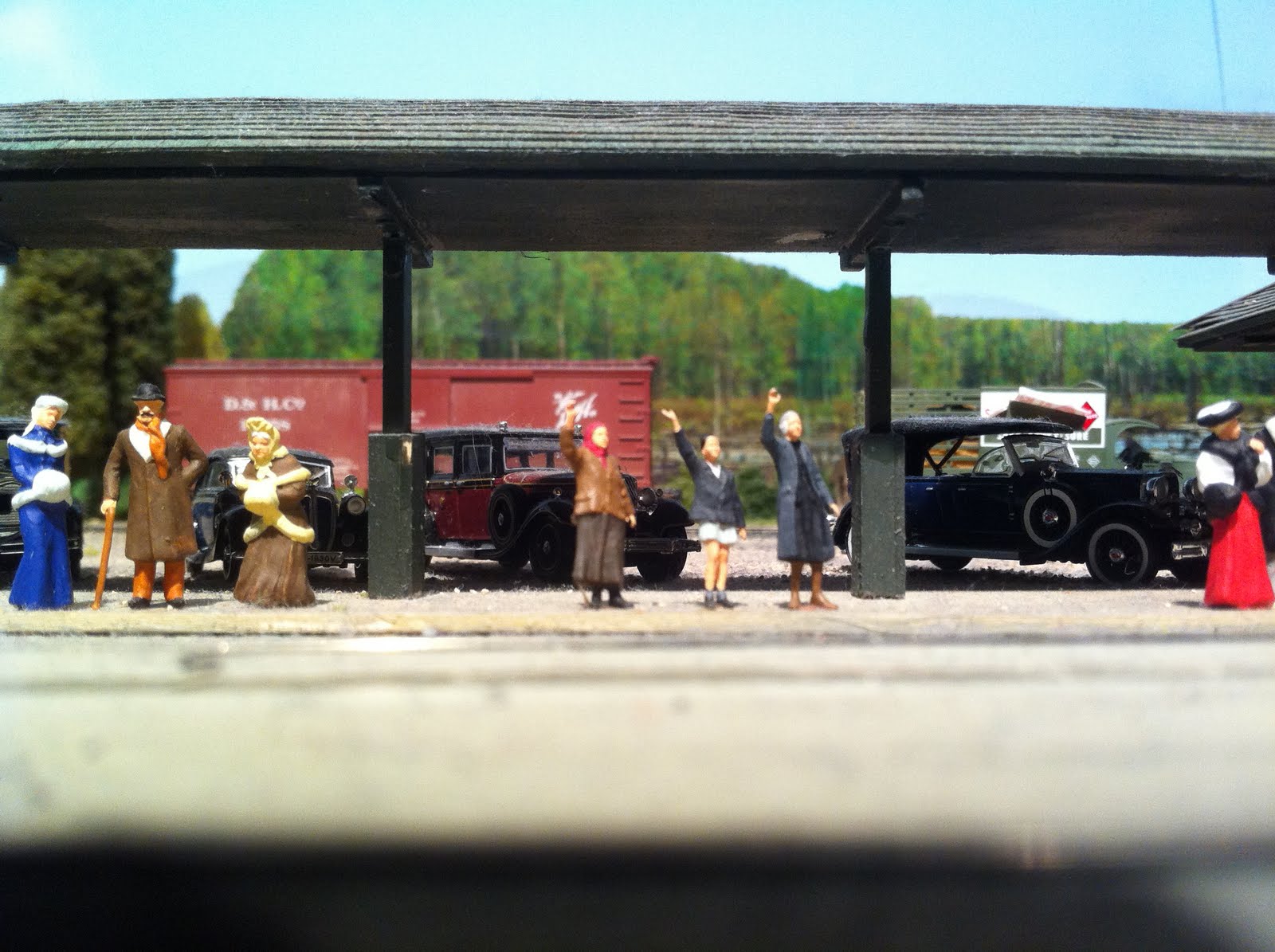 Here is CNYMOD member Russ Grills' award winning Cazenovia module
passengers wait for the next train to Manlius and Syracuse. 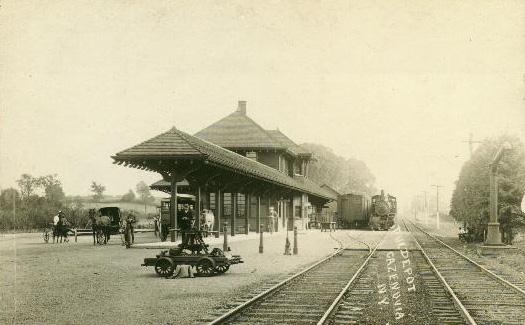 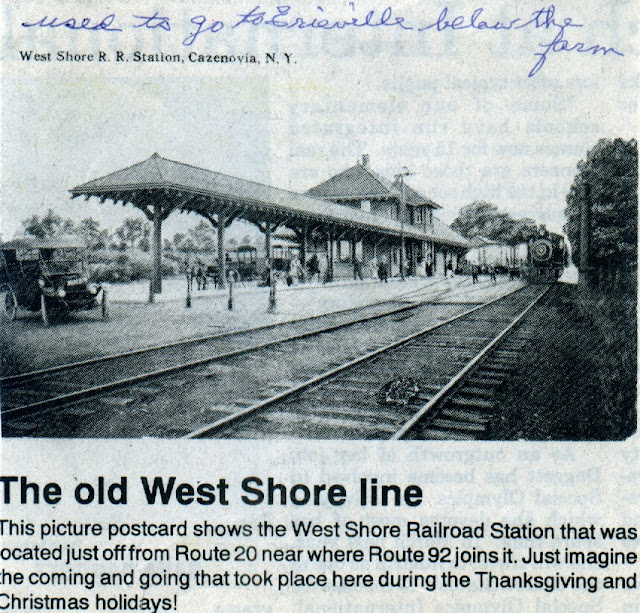 The successful building of the Syracuse & Chenango Valley Railroad during the post-Civil War era followed a previously failed attempt to bring rail transportation to the upland regions of central New York between Syracuse and Earlville.

The inspiration and need for this railroad was provided by its lineside communities of Fayetteville, Manlius, Oran, Cazenovia, Rippleton, Ballina, Erieville, Georgetown, and Lebanon to enhance their prosperity by becoming directly connected to the larger railroad systems at Syracuse (New York Central Railroad) and Earlville (New York, Ontario & Western Railway). By being so connected, these villages could trade and receive manufactured goods and agricultural products with more distant markets and residents could travel about the region and distant places in a manner previously inconceivable.
Because of the fragile financial climate of fledgling railroads of the time, several failures brought about a series of name changes to the line, which was eventually acquired by the New York Central in an unconventional manner bringing about the designation of this Syracuse to Earlville line as the Central’s Chenango Branch.
Discussed throughout this book is how the online communities brought about the railroad’s creation and how the railroad served them in return, what the railroad’s operating practices were, and why the public’s change of attitude relating to transportation needs brought an unfortunate end to sections of the route beginning in 1937.
While the Chenango Branch was healthy, however, its passenger trains brought city folks to Cazenovia Lake for summertime recreation and took children to their schools. Freight trains delivered coal to keep villagers warm during the winter and ice to help keep them cool in the summer while also providing refrigeration for consumable foods.
The Chenango Branch and it predecessors admirably fulfilled their promise to bring prosperity to the rural region it served in Onondaga and Madison counties. This fact is supported by legions of current residents who still vividly remember the railroad and think of it fondly.
This book will help to perpetuate their memory of the line, as well as introduce its rich history to a new audience who did not have the opportunity to witness the S&CV’s every day passing. "A Ride through the Countryside on the Syracuse & Chenango Valley Railroad" however, is not just a book about the railroad, but also a book about the communities it served and the one tunnel incorporated into its route that has remained a curiosity until this very day.
This was John Taibi’s ninth book about railroading in and around central New York and his first collaboration with co-author Jim Georges. Taibi owns and lives in a restored railroad station in Munnsville, while Georges’ Erieville homestead abuts the Chenango Branch right-of-way.
Here are a few local news items published over the years:


Syracuse Post-Standard, Friday, April 25, 1913
Immigrants Going West
The movement of immigrants westward continues heavy and many of these trains are handled over the New York, Ontario & Western and the Chenango branch of the West Shore. There were two trains of eleven cars each over the Chenango branch last night. It took two engines to haul them over the hill from Earlville to Cazenovia.

Fayetteville Bulletin, Wed., June 29, 1917
Last Trains on Chenango Branch
The New York – Chicago Wabash train which has been running over the Chenango branch of the New York Central, passing Fayetteville at 10:30 a.m. southbound and 1:30 northbound is discontinued under the new schedule which goes into effect July 1. The late afternoon train which accommodation of Cazenovia’s summer population will not run this season. These changes are made in line with the government’s request that  all retrenchment possible be made that it may have better freight facilties.

Milk Train is Run as Second Empire
____
Chenango Branch Shipment is Hurried to New York
____
Milk trains received just as much attention at the hands of operating officials on steam roads yesterday as did the Twentieth Century Limited realized or any of the best passenger trains. When the second milk train over the Chenango branch of the West Shore in four days arrived at the New York Central station late in the afternoon it was started immediately for New York as a section of the Empire State Express. There were four cars.
The train was scheduled to reach New York in time for an early delivery this morning. Wherever cars were loaded with milk on the system yesterday they were started for New York with all promptness. Trainmen reported snow 15 feet deep in some cuts between Syracuse and Cazenovia.

The Chenango Branch of the New York Central railroad, from Syracuse to Earlville through the southern and western part of Madison county, will be motorized, according to reports. The equipment will be a gasoline motor driven car. Economy of operation is the reason given for the proposed change. The St. Lawrence division will be the first on which the trial will be made.

Public Service Commission Orders
Chenango Branch
_____
The Public Service Commission has directed the New York Central Railroad to restore adequate service between Syracuse and Earlville on the Chenango branch. This order results from an investigation made by the commission at the request residents in communities served by the Chenango branch who claimed the curtailed service given under the present schedule is insufficient.
It directs that trains shall operate between Earlville and Syracuse daily except Sundays, leaving Syracuse not later than 7:25 a.m. and arriving at Earlville not later than 9:25 a.m. That they shall leave Syracuse daily between 3 and 4 p.m. and leave Earlville not later than 9:30 a.m., arriving in Syracuse not later than 12:25 p.m. Going toward Syracuse they shall leave Earlville each day except Sunday between 4:30 and 6:30 p.m.  The new schedule is to become effective April 7.
Service between Earlville and Syracuse was curtailed by the New York Central on Jan. 25. This action was followed immediately by protests from residents who asserted the new schedule did not give residents on the Cazenovia branch time to go to Syracuse and back and transact any business in the same day. The commission found this objection well founded.
The railroad alleged that automobile and bus development had caused a falling off in its business in this section to such a degree it could no longer give the service it had been accustomed to give and operate at a profit.

Trains Discontinued on Syracuse-Earlville R.R.
____
The Public Service Commission has rescinded orders requiring the New York Central Railroad to operate certain trains on the Chenango Branch between Syracuse and Earlville. The effect is to discontinue all passenger service on the Chenango Branch. A train is to be operated in each direction daily to handle local freight, express and milk.
The present service for passengers consists of mixed passenger and freight trains, operated by a motor car.
It was shown that on most days these four trains carry no passengers and that for the past six months there has been a loss of 38 cents per mile in the operation of the trains and that the loss in operating expenses for the daily run of one train amounted to $1,156 a month in addition to depreciation, equipment and interest, making the total $1,753 per month. It was estimated that the discontinuance of the motor car now used only for passengers will save the railroad $21,055 a year.
Practically all of the territory of the branch is served by buses.

Chenango Branch RR Resumes Milk Train
____
On Tuesday of this week, for the first time in nearly four years, daily milk service was resumed over the Chenango Branch of the New York Central from Earlville in Madison County to Syracuse.
The new service is the result of arrangements made between Dairymen’s League Cooperative Association and the New York Central and is made possible because of the increasing demand for League milk in the fluid markets of New York City.
The new service is hailed with satisfaction, not only by the dairymen residing in central Madison county, but by the business and commercial interests of that section.