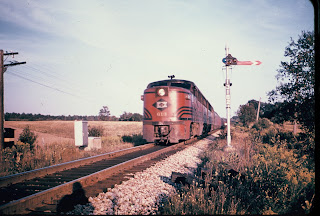 The Evening Times
Sayre, Pa., Tues., May 12, 1959
The Black Diamond Dies
There was only a handful - mostly old-timers and children with their mothers - at the requiem for a regal railroad train yesterday when the Lehigh Valley's Black Diamond Express played its swan song after a few days less than 63 years as one of the nation's great institutions.
The first Black Diamond made its run on May 18, 1906 regal splendor hailed as "The Handsomest Train in the World." Yesterday it died in very different circumstances - practically broke.

There was only a motley smattering of customers aboard - about normal for any day's run, according to Conductor E.C. Bedell, who was in charge of the last westbound Diamond, leaving Sayre shortly 4 o'clock. The conductor of the eastbound Diamond, leaving Sayre shortly after noon, told the same sad story.
There were some along the way who took a last ride, but for short distance - Lehighton to Wilkes-Barre, Tunkhannock to Towanda, Sayre to Ithaca, brief jaunts for their memory books.
On the eastbound Diamond there was a real railroad buff aboard, who had a briefcase bulging with Lehigh history who wanted to show it to everyone who would give him the time. There was a tear in his eye as he retold the story of the once great Diamond's glorious era, when she was the last word in plush mahogany and luxury.
Yesterday she was running with two baggage coaches,* a diner and a day coach in  sorry contrast to the palmy days when 12 day coaches were not unusual and her last was always an extra-fare parlor car, where millionaires and even presidents lolled in the lap of luxury during the great half century when the Iron Horse was king of the road.
Awarded the dubious pleasure of presiding at the requiem of the Diamonds were several local railroaders. At the throttle of the eastbound Diamond when it left Sayre for the last time was James Davenport of Sayre. James McGrath of Towanda was was the fireman and Clarence DeLaney of Buffalo, formerly of Sayre, was conductor.
Taking out the westbound Diamond was Frank (Dutch) Nigl of Sayre, with Duane Klinko of Athens as fireman. Mr. Bedell, the conductor, is also a Sayreite.
The two Diamonds were among six trains that bowed out forever yesterday. The Star and the Major, both night trains, and an east and westbound commuter train from Lehighton also made their last runs.
Only the Maple Leaf and the John Wilkes are left - the former the only through trains between New York and Buffalo, the latter a Lehighton - New York train east and west.
*RPO and baggage car
By Richard Palmer - March 16, 2011