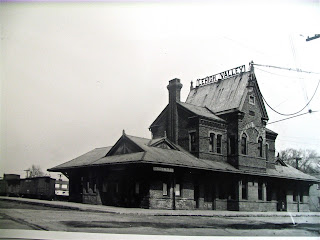 This ornate depot was originally built by the Elmira, Cortland & Northern Railroad which ran from Elmira to Camden, via Cortland and Canastota, to Camden.
_____


This station, at the north-west corner of East Fifth and Baldwin Streets in Elmira,  was built in 1886. View is looking northeast. Most of the structure was torn down about  1938 when service was terminated east of Horseheads.

The remaining structure was actually the freight house that would be to the right of the depot. The freight house, long abandoned, was demolished to make way for the new arterial about in 1977.
The DL&W had an adjacent track that crossed the EC&N/LV at grade between Washington Avenue and East Fifth Street to get to their State Street. The EC&N/LV track ended at the station. They did not cross East Fifth Street as some maps have erroneously suggested.
There also was a turntable that shows on maps  just north (by compass) of the station. The Lehigh Valley  operated two gas-electric ("doodlebugs") from Elmira to to Canastota during the 1930's.  During World War II the LV hauled very long trains of Army vehicles from the Holding and Reconsignment Depot in Horseheads to their National Docks subsidiary in New Jersey.
By Richard Palmer - March 17, 2011