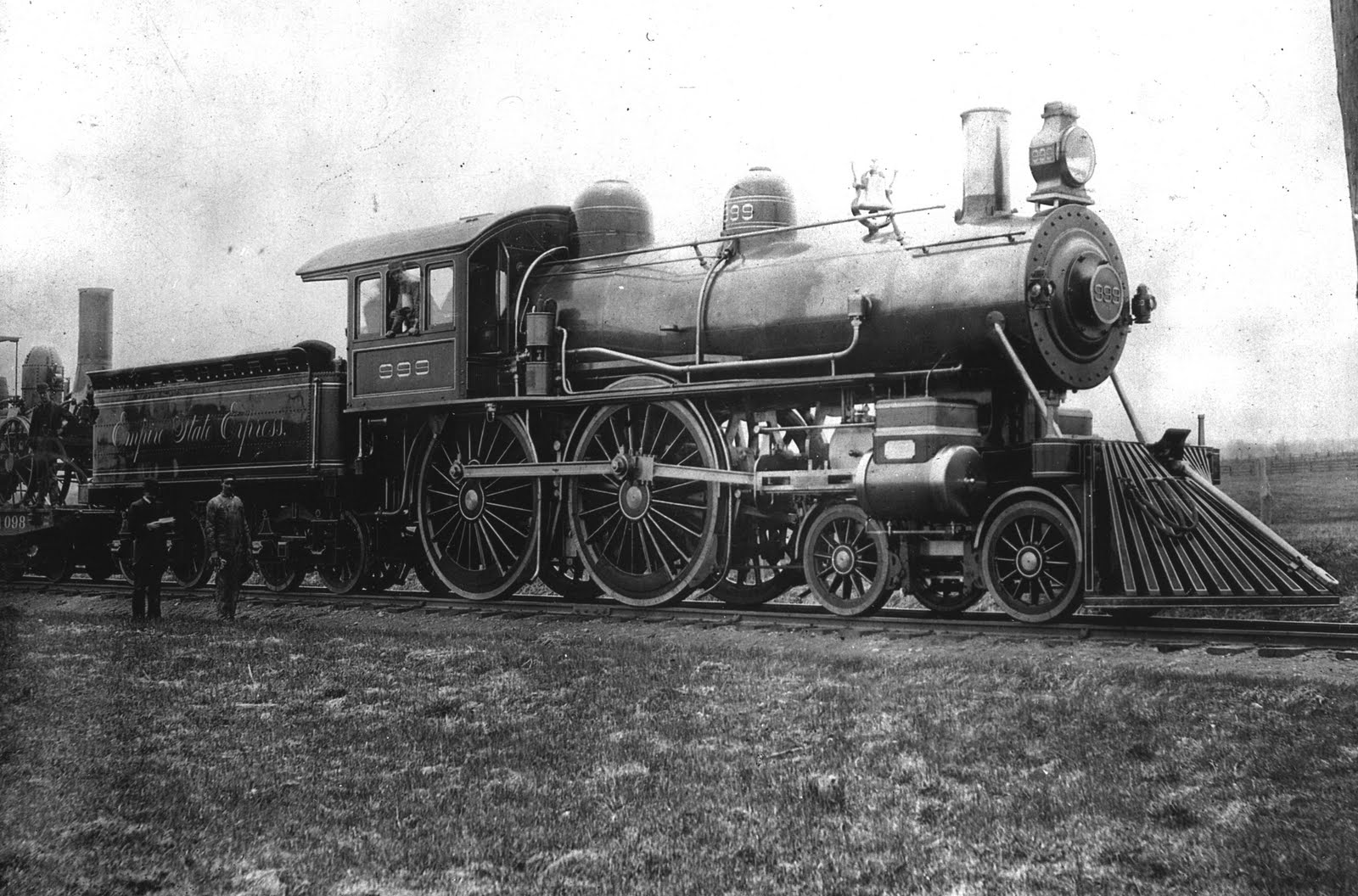 During the 1890s there was a desire for improved transportation and greater speed. This resulted in the creation of a train  named the Empire State Express which was the brainchild of George H. Daniels, General Passenger Agent of the New York Central & Hudson River.

Meanwhile, William Buchanan,  Superintendent of Motive Power, had designed and supervised construction of a fleet locomotives at West Albany shops  to pull this and other fast trains.  One particular locomotive occupied much of his time. It would be the most beautiful and fast locomotive ever built up to that time.
Everything about No. 999 was designed for speed with no pains spared for beauty. The bands, pipes and trimming were highly polished; the brass shone like a mirror; the cap was beautifully painted and across the tender (coal storage car) was written in 2.5 foot high gold leaf lettering "Empire State Express". Hand polishing provided a black satin finish and the 86-inch drive wheels gave the No. 999 a powerful appearance.
As the 1893 World's Fair in Chicago approached every country was planning to exhibit the fastest engine. On May 9, 1893 Charlie Hogan, from Batavia, an experienced and dependable engine pilot took over the untested locomotive at Rochester and was 25 minutes late due to boiler trouble. While passing through Batavia, Hogan kept opening the throttle and when the No. 999 arrived in Buffalo, it had run the 69 miles from Rochester in 68 minutes. The estimated speed was 102 miles per hour. Word spread of this marvelous run and the next morning when Hogan took the No. 999 back to Syracuse crowds turned out to see the "Queen of Speed."
In the afternoon the No. 999 again headed westward towards Buffalo but this time railroad officials were on board to record the speed. Between Batavia and Corfu, Engineer Hogan opened the throttle all the way and the No. 999 responded with 112.5 miles per hour by the time it sped through the Village of Crittenden, in Erie County. The speed was recorded by train officials and newspaper reporters who clocked off mile posts using hand-held stop watches. In the hands of a great engineer and a competent fireman, who fed coal to the furnace, the No. 999 marked its place in history as being the first thing on wheels to go over 100 miles per hour and had set a "world record".
Those who witnessed this famous event in Batavia stated that the No. 999 roared through the community billowing black smoke and kicking up a cloud of dust. A gathering of 75 to 100 onlookers cheered as the locomotive whirled passed and they were aware that no human had ever witnessed such speed before. News of this virtually unbelievable accomplishment was telegraphed to all parts of the world. Charlie Hogan and the No. 999 were the star attractions at the Chicago World's Fair and brought prestige and honor to the New York Central and Hudson River Railroad.
The New York Central & Hudson River Railroad's exhibit was a resounding success. Toy manufacturers and amusement parks rushed to capitalize on the No. 999 fame. There were over 3,000 miniature versions of that engine created for amusement park railroad rides which were shipped as far away as Thailand and South Africa. Electric train sets began putting 999 on their engines. This famous locomotive was shown at other expositions that included the 1927 Baltimore Fair of Iron, 1933 and 1934 Chicago Century of Progress, 1938 Cleveland Exposition, 1939 and 1940 New York World's Fair, 1948 and 1949 Chicago's Railroad Fair and at various historical observance throughout the railroad system.
The great engine was retired from shows and reduced to hauling a lowly milk train in the Albany area. In 1962 it was rescued and restored to her glory days and given by the New York Central to the Chicago Museum of Science and Industry. The site of this museum is on the same grounds as the 1893 Chicago World's Fair and it is estimated that annually over two million visitors see the No. 999.
As for Charlie Hogan he never retired and was able to carry out his duties as manager of the New York Central Shop in Buffalo until the age of 89. His father had been a foreman for the New York Central and at the age of 14 Charlie began as a water boy. He soon became a switch tender, then a brakeman, then a fireman alternating working in the shops as a machinist's helper. The New York Central noted that the former Batavian had an unusual record for in his 25-years of piloting locomotives he never once hit a cow which was a common hazard for engineers. Two months after the famous run Charlie was promoted from an engineer to instructor for other pilots in the art of operating a locomotive. In 1900 he became master mechanic in Buffalo, promoted to superintendent of motive power in 1910. Charlie died on November 11, 1939 and at the time of his death, his 112.5 miles per hour speed record had been surpassed only three times over the rails.