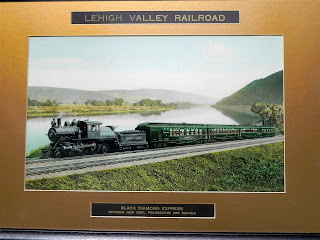 Boston Herald, May 19,  1896
The Lehigh's Black Diamond Express Trains
_____
Yesterday at 12 o'clock the Lehigh's new train, the "Black Diamond Express' drew out from the Jersey City station of the company for its initial trip over the road. At the same time, a similar train started from Buffalo station eastward on its maiden trip. Both trains were heavily laden with passengers.
It was the intention of the officials to create a record over the Lehigh with the new train. General passenger Agent Charles S. Lee was in charge of the westbound train and several officials of the Transportation and Motive Power departments were also on board.     Preparations were made for a fast run and the whole train was minutely inspected to see that everything was in proper condition.
The run from Jersey City to Easton, a distance of 76 miles over a gently rising grade, was made in 1 hour and 33 minutes, arriving at 1:47 o'clock schedule time. A stop of one minute was made at Newark and another of 2 minutes at South Plainfield, where water was taken in. Deducting these stops, the actual running time of the train was 1 hour and 30 minutes.
The fastest time was made between Newark and Ashbrook, where a mile was run in 47 seconds, or an average of 75 miles per hour. At  Easton engines were changed.     After leaving Easton, the train ran on schedule time clear through to Buffalo. Stops were made at Bethlehem, Allentown, Mauch Chunk, Wilkes Barre, Sayre and Rochester Junction, from which place one of the day coaches was sent to this city over the branch road.     The fastest continuous run of the trip was made between Laceyville and Sayre, over a stretch of 56 miles of road.
The distance as accomplished in fifty minutes. No really phenomenal time was made, as it was not the object of the railroad officials to make a record breaking trip, but simply to furnish a rapid comfortable means of travel between New York and Buffalo. Some time in the future an attempt will be made to lesson the time of the run, but in the meantime the present schedule will be followed.
The train left New York City at 12 o'clock noon and reached Buffalo at 10 o'clock in the evening. Deducting 14 minutes for crossing the ferry between New York and Jersey City and 38 minutes for stoppage, the total actual running time was nine hours and eight minutes, the time of the entire trip being 10 hours as per schedule.     The eastbound train made a remarkably fast run between Buffalo and Rochester, coming into the Junction four minutes ahead of schedule time. The engineer said he had to kill time between stations. A speed of a mile in 58 seconds was maintained in many places, and everything pertaining to the running gear of the train and engine was as cool as when the start was made.
By Richard Palmer - March 18, 2011