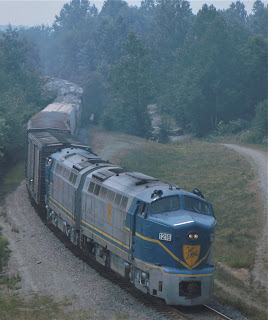 Obtained from the Monogahela Railway in 1974, the two Baldwin RF-16 "Sharks" were part of a preservation project under the guidance of Carl B. Sterzing Jr., Chief Executive of the Delaware and Hudson. This view shows them on the run between Binghamton and Sayre.  Along with normal freight duty, they participated in public relations ventures and railfan trips until the end of Mr. Sterzing's tenure. They were later sold to Castolite Inc. of Minneapolis, Minnesota inn April 1978.
By Richard Palmer - March 16, 2011