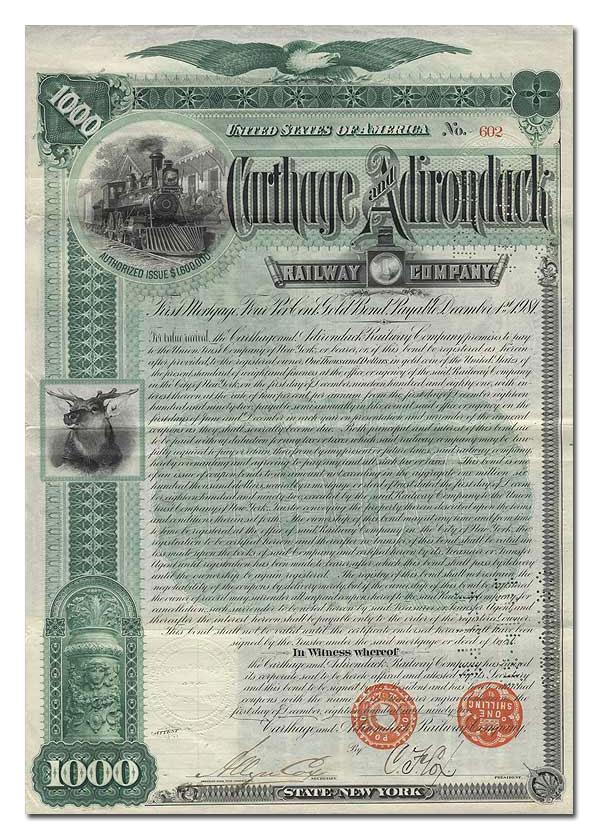 Relaid with iron rails by the Carthage & Adirondack, it connected with the Utica & Black River Railroad and the Carthage, Watertown & Sackets Harbor Railroad at Carthage. The line was opened to a remote mining community known as Jayville by 1887; pushed on to Little River (Benson Mines) by 1889; and extended to Newton Falls (its current terminus) in 1896.
The Carthage & Adirondack ceased to be when, in 1891, William K. Vanderbilt extended his railroad empire by bringing the road into the fold of the New York Central & Hudson River Railroad. It ran from Carthage to Newton Falls. During World War II an extension was built to Clifton Mines, but was later abandoned. It had been built on the right of way of the old Newton Falls & Northern logging railroad. Passenger service was discontinued in 1942.
For many years the 45-mile line's primary customer was Jones & Laughlin Steel Co. and millions of tons of iron ore was transshipped from Benson Mines to Youngstown and Pittsburgh steel mills. This operation ceased in the 1970s. Although the line is now owned by the Mohawk, Adirondack & Northern, it is essentially abandoned, although the tracks are still in place.