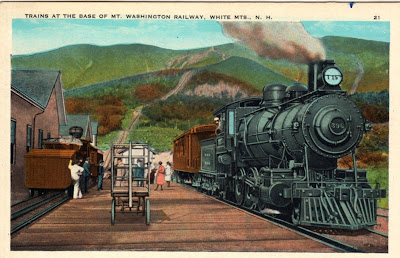 As shown in this view, trains once ran all the way to the foot of Mount Washington in New Hampshire. Built by the Boston, Concord & Montreal Railroad, the Mt.Washington Branch was completed in 1876 and leased to the Boston & Maine Railroad in 1895. 1932. Located in the White Mountains, the branch was about six miles long and traveled from Fabyans to the base of the Mount Washington Cog Railway. A few brooks were crossed on wooden bridges. Passenger service on this branch was discontinued on August 31, 1931 and the line was abandoned in 1932.